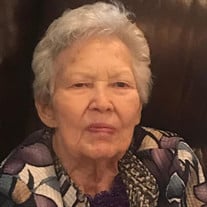 Anna Jean White, age 89, of Louisville, entered into God’s hands on May 30, 2021. She was born in Peonia, Kentucky on April, 27, 1932 to her late parents, Groman and Elsie Higdon. Anna was a loving wife, mother, and grandmother, which showed through with her devotion and care to her family and friends. She had many God given talents which allowed her to be a homemaker for most of her life, cooking and catering for others, floral arranging, sewing, knitting, crocheting or any other need for her family or others. She handled all aspects of her life with grace. This was shown once more when caring for her husband, Al, during his battle with Alheimers. Once her children had grown, Anna enjoyed working for many years at Churchill Downs in the Eclipse Room. Anna was strong in her faith and was a member of Incarnation Catholic Church. In addition to her parents, she was preceded in death by her husband, Bernard Aloysius White; brothers, Virgil, Laymon, Coyie, and Riley Higdon; sisters, Louise Vaughn, Theodoris Grubb, Evelyn Higdon, and Trensa Findley. Anna is survived by her children, Curtis White (Jane), Phillip White (Therese), Angela White (Kavin), and James White (Cindy); brother, Daymond Higdon (Mary Ellen); sisters, Polly Daniels (David) and Janie Schimmels; six grandchildren, Brittany Triplett (Brian Jenkins), Kenneth White (Belen), Scott Triplett, Lauren Watson, Austin White, and Travis White; and four great-grandchildren, Alexis, Isabella, Lily, and Rylee; and several nieces and nephews. Her funeral mass will be at 10:00 AM on Wednesday, June 2, 2021, at Incarnation Catholic Church, 2229 Lower Hunters Trace, Louisville, KY 40216. Burial will follow at St. Anthony Cemetery, Peonia, KY. Visitation will be from 1:00 PM - 8:00 PM on Tuesday at Owen Funeral Home, 5317 Dixie Hwy. Louisville, KY 40216. The family would like to extend their gratitude to the staff of Essex Nursing and Rehab for the compassionate care shown to Anna. Expressions of sympathy may be made to Mass of The Air, which Anna enjoyed weekly.

The family of Anna Jean White created this Life Tributes page to make it easy to share your memories.

Send flowers to the White family.