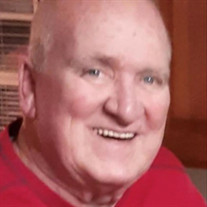 Charles “Chuck” W. Betz Jr., 77, of Shepherdsville KY, passed away, May 12th, 2022, surrounded by his loving family. Chuck was born, September 19th, 1944, in Louisville KY, to his parents, Nellie Hawkes and Charles William Betz Sr., “C.W.” After graduating high school, he went on to work as a “Customer Systems Engineer” for Bell South and Lucent Technology. After 34 years of devoted work, he retired from Lucent Technology and began a well-earned retirement. He was a member of Valley Christian Church. In his free time, he enjoyed playing golf, going fishing, and hunting. However his favorite pastime was spending the day with his family and friends. Chuck was preceded in death by, his mother Nellie Hawkes; stepfather, Herbert Hawkes; father, Charles William Betz Sr. “C.W.” and sister Shirley Betz. He is survived by his loving wife of 58 years, Elvira Jane Betz; daughters, Kathy Lauterbach (Tony), and Susan Betz (Robin); grandchildren Nicole (Josh), Kristin (Nick), Lane (Victoria), and Laken (Todd); great grandchildren, Jason, Oaklee, Miles, Eloise, and Aniston; sister, Karen Taylor and many other extended family. Donations can be made in Chuck’s memory to Hosparus Health, hosparushealth.org . Service will be held on Wednesday May 18th, 10:00am, at Owen Funeral Home, 5317 Dixie Highway, Louisville KY, 40216. Visitation will be held on Tuesday, May 17th, 3:00pm-8:00pm and on Wednesday 9:00 – 10:00 AM at the funeral home.

The family of Charles “Chuck” W. Betz Jr. created this Life Tributes page to make it easy to share your memories.

Send flowers to the Betz family.