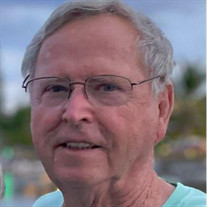 Charles Joseph Suell (80) was born on February 2, 1942. He was preceded in death by his mother, Julia (Bindner) Suell Kessinger, and father, Charles Elijah Suell (who passed when Charlie was only 3) and he was blessed with the man he called Dad, Marvin T. Kessinger, as well as his sister Donna Suell Robinson. He is survived by his wife of 51 years Nancy (Ford) Suell and two daughters, Heather Suell Stewart (Don) and Shelley Suell Knopf (Brian), and four grandchildren; Brennan and Ruby Stewart and Ramsey and Charlie Knopf whom he dearly loved. He has 2 sisters, Bobbie (Suell) Shaw (Jim), Patsy (Suell) Froman Columbus, and one brother, Tony Kessinger (Dianne), and many nieces, nephews, and godchildren. Charlie was a son, husband, uncle, father, brother, and friend to so many (you know who you are). Heaven gained an amazing angel on February 9, 2022, when he passed peacefully surrounded by family. Charlie grew up in the west end, attended St. Columba, and loved his alma mater, Flaget High School (he remained an active member of the alumni group his whole life). He was a veteran (National Guard) who loved his country. He attended the University of Louisville Speed School but was always a University of Kentucky fan. He went on to have many careers and always said, “Each job was better than the last.” There was nothing he loved more than family, friends, and spending time at his lake house. He loved to tell a good story and touched lives wherever he went. The world is a better place after having him in it and those of us who loved him will never be the same. Services will be held at Owen Funeral Home, 5317 Dixie Highway on February 14 from 2 p.m. to 8 p.m. and a funeral service will be held there on February 15 at 11 a.m. In lieu of flowers, the family requests donations are made to the Flaget Alumni Scholarship Fund, P.O. Box 36558, Louisville Kentucky 40233-6558.

Charles Joseph Suell (80) was born on February 2, 1942. He was preceded in death by his mother, Julia (Bindner) Suell Kessinger, and father, Charles Elijah Suell (who passed when Charlie was only 3) and he was blessed with the man he called... View Obituary & Service Information

The family of Charles Joseph Suell created this Life Tributes page to make it easy to share your memories.

Send flowers to the Suell family.