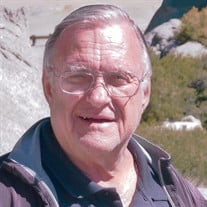 David Elmer Blair passed away on Monday afternoon May 2, 2022 at Norton Brownsboro Hospital ICU following a short battle with blood issues complicated by Covid. Dave was born on February 22, 1934 in Creston, Iowa to David & Melba Blair. Shortly after birth, his five year old brother Alma prayed that he would be a good fighter, and he was. The 2 boys loved each other & shared a bedroom. He was well liked at school & became a good student...winning awards in art, science, photography, drama, sports. He spent his afterschool hours & summers fishing, working in a local grocery store & pharmacy, doing science projects in the family basement, wrestling, delivering newspapers. After graduating from Creston High School he continued his education at Graceland College in Lamoni, IA then went on to Iowa State Univ. in Ames. After receiving his PhD in Analytical Chemistry he worked as a research scientist for E. I. DuPont Co. in Wilmington, DE, Louisville, KY & Charleston, WV. inventing instruments to solve industrial problems. He eventually retired in 1998 with several patents under his belt. He was always active in his church life. He was ordained a minister in 1958 and served as a self-sustained Elder for the remainder of his life, pastoring congregations in Ames, Ia., Wilmington, DE and Louisville, KY. He helped build churches & reunion grounds, directed youth camps; he represented the church at World Conferences, administered to the sick, officiated at weddings & funerals. He was a source of strength to many. On Easter Sunday in 1961 He was married to Joyce Elliott in Modesto, Ca & together they raised three children: Carolyn Darcy, David Elliott & Kelly Lynn in Wilmington, DE. & Louisville, KY. Their home was always a magnet for neighborhood activity. In his adult life he had an active travel schedule. In addition to vacationing in Canada, England, Ireland, France, Italy, Holland, Switzerland, Germany Japan, Hong Kong, Hawaii, he was invited to attend an international scientific symposium in Tashkent, Uzbekistan as the guest of the Soviet Union. At the conclusion of the symposium Dave & Joyce were invited to join the symposium organizers for an appreciation trip to the ancient cities of Samarkand & Bukara...sites that were normally considered off limits to foreign visitors. No, he was not a spy. Dave was preceded in death by: his parents David & Melba Blair, his daughter, C. Darcy Blair-Andriuk, MD and his daughter Kelly Lynn Blair-Fryer. In the aftermath of his daughters passing the family established a Scripture Garden in their honor at the Forest Hills Community of Christ Church located at 2401 Merriwood Drive, Louisville, KY 40299-1730. All are welcome to this peaceful place...lit from dusk till midnight. Dave is survived by: His brother Alma Blair of Des Moines, IA, nieces Kathy Elliott & Dianne Kunzler, nephews David R. Blair & Bruce Blair...and families. Wife, Joyce E. Blair, Son David E. Blair, wife Rebecca Fox-Blair & grandchildren Sophie Elaine & David Benjamin, Son-in-law Alex J. Andruik, wife Kija & grandchildren Jonathan & William Son-in-law, Thomas I. Fryer & grandchildren Darcy C. Fryer & Julie Fryer-Bailey, husband Brian Bailey & great grandchildren Cameron, Libby & Reese He will be remembered for his scientific accomplishments, his dedicated service to the church and community, his strict attention to finding the truth, his sense of fair play and his love for family, friends and all people. He was a great humorist, husband, father & friend. He will be missed. A Celebration of Life will be held from 10:00am until 12:00pm on Saturday, May 21, 2022 at Forest Hills Community Christ Church, 2401 Merriwood Drive. Following the service there will be a David Blair Memorial Balloon Launch. A Candlelight Vigil will be held in the Scripture Garden on Friday, May 20, 2022 from 10:00pm until 12:00am (midnight). All are welcome to attend.* *MASKS ARE REQUIRED FOR INDOOR SERVICES. If you feel ill or have recently been exposed to COVID we ask that you attend the services via Zoom. The Zoom information for David Blair’s Memorial Service is as follows: Meeting ID: 770 845-9125 Password: 417679

The family of David Elmer Blair created this Life Tributes page to make it easy to share your memories.

David Elmer Blair passed away on Monday afternoon May 2, 2022...

Send flowers to the Blair family.