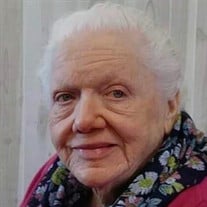 Florence Ellen Edgin, age 81, entered her heavenly home with her bible in hand on Friday, June 11, 2021. She was born in Springfield, IL on March 6, 1940 to her late parents, Lester and Berta Taylor. Florence was the most Godly woman you would ever meet and was solid in her faith. She was full of joy, always bursting with positivity, loved children, and served many years as a Sunday school teacher while her late husband drove the church bus. She was active in ministry to nursing homes, even when she became a resident herself. Her entire life, she would minister to everyone she met. In raising her children, she would never provide them with any sympathy until they learned to put others and their feelings first. She had a selfless personality. Anytime she would notice you needed guidance she would offer you her gentle finger pointing upward, signaling to pray. She never met a stranger and never said goodbye. It was always “I’ll see you later.” Thanks to her ministry, many will see her later. In addition to her parents, she was preceded in death by her husband, Donald Wayne Edgin; daughter, Theresa Lynn Carter; and infant brother, William Robert Taylor. Florence is survived by her daughter, Lorie McGinnis (Wendell); son-in-law, Mark Carter; six grandchildren, Matthew (Ashley), Bethany, and Mary Carter, Tiffany, Katie, and Levi McGinnis ; and three great-grandchildren, David, Evan, and Samuel Carter. Funeral services will be at 1:00 PM on Thursday, June 17, 2021 at Victory Apostolic Church, 14215 Dixie Hwy. Louisville, KY 40272. A private burial will follow at a later date at Kentucky Veteran Cemetery Central. Visitation will be from 4:00 - 8:00 PM on Wednesday at Owen Funeral Home, 5317 Dixie Hwy. Louisville, KY 40216. Expressions of sympathy may be made to Kosair Charities. The family would like to especially thank the Moreland family for all the love shown over the years and especially during their loss.

Florence Ellen Edgin, age 81, entered her heavenly home with her bible in hand on Friday, June 11, 2021. She was born in Springfield, IL on March 6, 1940 to her late parents, Lester and Berta Taylor. Florence was the most Godly woman you would... View Obituary & Service Information

The family of Florence Ellen Edgin created this Life Tributes page to make it easy to share your memories.

Send flowers to the Edgin family.