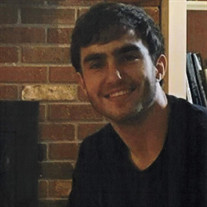 Garett Bradford Higdon, 23, of Louisville KY, passed away, May 5th, 2021. Garett lost his battle with drug addiction, which he struggled with for many years. Despite the love and support from his family and friends to his involvement in AA/NA, Garett was a beautiful soul, when he laughed his eyes would sparkle and his smile would light up the room. His brother Davis describes Garett as the most passionate person he has ever known. Garett was also quite a sports fanatic, his knowledge of the game, any sport, he knew the players with a keen understanding of how to play the game, and he was an avid UofL fan and had expressed a desire to someday becoming a sports analyst. This is an extremely difficult time for all of us, but we know that he is no longer in pain and will be watching over us. “Dear Lord, we lay our burdens at your feet today. We choose to let go of our need for control and trust you are at work. In Jesus name we pray.” Garett is survived by his parents, Lisa Higdon and Tom Higdon; brother, Davis Higdon and Ben Szabo whom Garett considered his brother rather than a cousin. Ben lovingly referred to him as “Gary”; grandparents, “Mimi” Libby Stinson, “Papaw” Roy Stinson, and “Papaw Bug” Junebug Foor; uncles and aunts; Dwight Szabo, Michele Szabo, John Higdon (Robin), Janis Belt (Rob), Steve Higdon (Suzanne); cousins: Morgan, Andrew, Caleb, Conner, Aaron, Nathan, Eric, Alex, Kevin, Matt, Samantha, and Lauren. He was preceded in death by his grandparents, “Mamaw” Mary Lee Higdon and “Papaw” Jack Higdon. A Visitation will be held from 2:00 pm-7:00 pm, with a service from 7:00 pm-8:00 pm to be held on Thursday, May 13th, at Owen Funeral Home – Jeffersontown, 9318 Taylorsville Road, Louisville KY. Expressions of sympathy may be made to Volunteers of America Mid-States Addiction Recovery Services at Shelby Campus, 1436 South Shelby Street Louisville, KY 40217, 502-635-4530.

Garett Bradford Higdon, 23, of Louisville KY, passed away, May 5th, 2021. Garett lost his battle with drug addiction, which he struggled with for many years. Despite the love and support from his family and friends to his involvement in AA/NA,... View Obituary & Service Information

The family of Garett Bradford Higdon created this Life Tributes page to make it easy to share your memories.

Garett Bradford Higdon, 23, of Louisville KY, passed away, May...

Send flowers to the Higdon family.