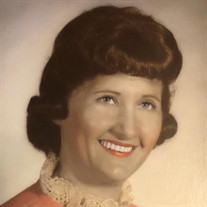 Gladys Louise (Preston) Weedman, 90, departed this life on October 11, 2021. She was born on October 8, 1931 to William Richard and Ethel Jane (Stinson) Preston in Millwood, Grayson Co, KY. She lived in Louisville until she relocated to Illinois to be closer to family. Gladys married the love of her life Marvin Jay Weedman on her birthday in 1947. They were married 58 years until his passing. She was a homemaker who took pride in her home and flower gardens. She enjoyed watching nature, crocheting, flower arranging, making crafts, and working puzzles. Gladys was saved at Rabbit Flat Church in Caneyville, KY. when she was a young girl. She was a devoted member of Zion United Baptist Church since she joined on March 10, 1956. Gladys enjoyed singing in the church choir and sang in a trio with her mother and sister. She deeply missed attending church after she became physically unable to do so. She is survived by her daughter, Sharon Bryden and husband Tommy; granddaughters, Amanda Bryden & Megan Bryden-Wasoba and husband Ryan; sisters-in-law, Sara Jo Preston, Katy Cook, Erma Spencer, Wilma Whitehead; brother-in-law, Howard Weedman , and several nieces and nephews. Besides her husband and parents, she was also preceded in death by her siblings, O.W. Preston, Charles Preston, Hayward Preston, and Ann Esto. Visitation will be held Sunday Oct. 17 from 2:00-8:00 pm and Monday, Oct. 18 from 9:00 am until the funeral at 11:00 am at Owen Funeral Home, 5317 Dixie Hwy. with burial in Lone Hill United Church Cemetery. In lieu of flowers, expressions of sympathy may be sent to Lone Hill Baptist Church, 5410 Mt. Washington Road, Louisville, KY. Please add “In memory of Gladys Weedman” in the memo.

Gladys Louise (Preston) Weedman, 90, departed this life on October 11, 2021. She was born on October 8, 1931 to William Richard and Ethel Jane (Stinson) Preston in Millwood, Grayson Co, KY. She lived in Louisville until she relocated to Illinois... View Obituary & Service Information

The family of Gladys Louise (Preston) Weedman created this Life Tributes page to make it easy to share your memories.

Send flowers to the Weedman family.