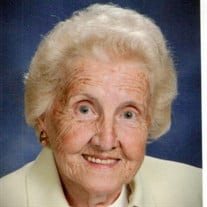 Hanna Else Keune Henderson “Let There Be Peace on Earth and Let it Begin with Me.” Hanna was born on October 8th, 1928 in Karlsruhe, Germany to father Friedrich Keune and mother Ottilie Schaffert Keune. She grew up in Karlsruhe with two sisters, Ruth and Ilse, and lived quietly with her family until the beginning of World War II. As an older youth she survived many harrowing experiences, including bombing raids and a long journey across the country alone with her sister on foot. As a girl, Hanna dreamed of studying music, but did not get the opportunity due to the economic pressures of war. She did, however, teach herself to play the harmonica, and would continue to nurture a lifelong love of music that would be passed down to her family. After the war, Hanna met her husband of 53 years, Richard Albert, who was an American soldier. They sailed to the U.S. together and began a new life. They eventually decided to settle in Kentucky, which Hanna said reminded her most of Germany with its rolling hills and woods. Their family began with three children, Linda (Mike), Sharon (Cary), and James (Carole). This family would eventually expand to include six grandchildren, seventeen great-grandchildren, and one great-great grandchild. Hanna lived a truly beautiful life of commitment to her family and the Lord Jesus Christ. She was a beloved member of Bethany United Methodist church and served in many outreach ministries. She served with the Gideons in the distribution of God’s Word. Her family will always remember her creativity and dedication to make holiday meals and gatherings beautiful and special. She loved the outdoors and inspired her family to do the same. She taught several of the grandchildren to swim during summer trips together to Rough River Lake. Hanna’s company was cherished by all who had the opportunity to meet her. Her quiet, practical wisdom, combined with a sharp sense of humor made conversation with her always enjoyable and enlightening. Hanna held a deep curiosity about the world and was known for often having a world atlas out on the coffee table just to study the maps and think about places she had either visited or wondered about. She was always grateful for the opportunities she had to travel, especially with Richard. Gratitude was a hallmark of Hanna’s life and personality. Even when her health declined, she maintained her kindness and thankfulness for what she had. She never lost her sense of humor and was always quick to laugh even when things were very difficult for her. Her family and friends consider her to be a truly great lady who profoundly shaped and influenced those around her for the better. She would often quote the following words to one of her favorite songs: “Let there be peace on earth and let it begin with me.” Hanna was preceded in death by her husband of 53 years Richard A. Henderson as well as her sisters Ruth Horsley and Ilse Doscher. Left to cherish her memory are six grandchildren, Richard Krauth (Terri) Amanda Brinson (Donnie), Holly Davis (Kevin), Adam Russell (Kristin), Susan Macy and Mark Henderson (Ashley), Sixteen great-grandchildren Hanna, Aidan, Stephen, Naomi, Ayden, Eden, Katie, Devin, Donnie Jr., Dylan, Cameron, Madelynn, Ellie, Aaron, Tye, Callie and one great-great granddaughter Kendall. Her funeral service will be at 11 a.m. Monday, December 13, 2021 at Bethany United Methodist Church, 6100 Mormon Rd. with burial to follow in Bethany Cemetery. Visitation will be from 3-8 p.m. Sunday at Owen Funeral Home, 5317 Dixie Hwy. Expressions of sympathy may be made to Hosparus of Louisville or Bethany United Methodist Church.

Hanna Else Keune Henderson &#8220;Let There Be Peace on Earth and Let it Begin with Me.&#8221; Hanna was born on October 8th, 1928 in Karlsruhe, Germany to father Friedrich Keune and mother Ottilie Schaffert Keune. She grew up in Karlsruhe... View Obituary & Service Information

The family of Hanna Keune Henderson created this Life Tributes page to make it easy to share your memories.

Hanna Else Keune Henderson
“Let There Be Peace on Earth and Let...

Send flowers to the Henderson family.