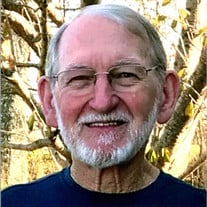 Harold “Andy” Anderson, 80, of Taylorsville Kentucky passed away, March 12, 2021. Andy was born in Orange County California to his parents, Illus “Richie” and Nina Anderson. He grew up in the small town of Burkesville Kentucky. Being raised on a farm, Andy enjoyed being outdoors, fishing, boating, and hunting. He was an avid U.K fan and would spend hours watching the games with his family. Most of all he loved and cherished every minute he spent with his grandchildren. Andy retired from G.E after many years of dedicated work. He was a member of Evangel World Prayer Center and would often be found attending service. His memory will be cherished by all whose lives he touched along the way. Andy was preceded in death by his parents, Illus and Nina Anderson; wife, Brenda Anderson; daughter, Jane Anderson; brother Troy Anderson; brother - in- law, Gene Melton. He is survived by his loving children, Stuart Anderson, Steve Anderson, Denise Walker (Chris) and Renee Cruse (Ken); grandchildren, Laura Ann, Amanda, Emily, and Nicholas; siblings, Illus Anderson Jr. (Virginia), Larry R. Anderson (Patsy), Charlene Melton (Gene) and Shelvy Anderson (Troy). Along with many friends and family he made along the way. Visitation will be held on Tuesday, March 16, from 1:00pm-8:00pm at Owen Funeral Home – Jeffersontown, 9318 Taylorsville Rd., Louisville Ky.,40299. A service will be held Wednesday, March 17, 1:00pm, at the funeral home. A short visitation will be held prior to service from 11:00am-1:00pm.

The family of Harold "Andy" Anderson created this Life Tributes page to make it easy to share your memories.

Send flowers to the Anderson family.