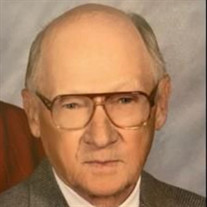 Howard E. “Gene” Stanton, 92, died peacefully at home on Tuesday, December 28, 2021. He was born in Loami, IL. on June 30, 1929, to Howard A. Stanton and Rose Irene (Stanton) Whitman. Left to cherish his memory is his wife of 71 years, Barbara Jean; 2 sons, Gary Stanton (Cindy), and Larry Stanton; daughter, Melanie Robinson (Terry); 4 grandchildren, Sarah Sutliffe, Priscilla Peters (Eric), Christopher Robinson and Ethan Robinson; 7 great-grandchildren, Leah and Owen Sutliffe, Simon, Walker, Eden and Gwen Peters and Jace Robinson. Gene loved God and Jesus Christ. He was an active member of Shively Christian Church where he served faithfully in various capacities. Gene worked as a supervisor at Louisville Gas and Electric for 39 years prior to his retirement. He served our country in the Army during the Korean War. Gene was an accomplished golfer and enjoyed golfing until he was 90. He also played dartball weekly with the church team. He was a humble man who was loved and will be missed by family and friends. Expressions of sympathy may be made in his memory to Hosparus of Louisville or Samaritans Purse, 801 Bamboo Rd. Boone, NC. 28607. His funeral service will be at 11:30 a.m. Monday, January 3, 2022, at Owen Funeral Home, 5317 Dixie Highway with burial at Louisville Memorial Gardens West. Visitation will be from 3:00 – 7:00 p.m. Sunday at Owen Funeral Home.

The family of Howard Eugene "Gene" Stanton created this Life Tributes page to make it easy to share your memories.

Send flowers to the Stanton family.