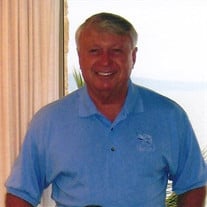 James Eugene Hudson, 78 Born in Oswego, IL on January 13, 1942. He spent his life in Louisville, KY. After retirement in 1989 — he shared his time between Louisville and Stuart, FL where he died on January 24, 2020 after a short illness. Jim was first and foremost a follower of Christ. He spent his life loving people with kindness and compassion. He was a man that walked in the footsteps of Jesus. His smile was infectious and he always viewed all circumstances with a positive attitude. Jim was an active member of Southeast Christian Church. He spent many years volunteering within the church. He graduated from duPont Manual High School, was a member of the 1960 famed football team, active in the Alumni Association and a member of the Hall of Fame. He graduated from University of Louisville and went on to get executive training at Duke University. Jim had a successful career in Human Resources starting at BF Goodrich, Globe Union, American Air Filter, and ending as Vice President of Kroger Company (Peyton's) and then Dairyman. Jim was a Kentucky Colonel. He served on the Board of Directors for the American Red Cross. After retirement, he and his wife spent their winters in Stuart, FL where Jim was active in the community. He was President of the Martin County chapter of the Florida Shore & Beach Preservation Association, President of the Hutchinson Island Coalition, member of the St. Lucie Inlet Committee and the Bicycle and Pedestrian Action Committee. He was responsible for getting sidewalks, a lot of the landscaping on the Island and he anonymously contributed many other improvements. He was given the honor of "Citizen of the Year" in 2019 for his work and contributions to the Island. He served on the Board of Administrators for both of his neighborhoods in Florida and Kentucky. During Jim's life he enjoyed traveling, running, tennis, biking, walking, growing his flowers and just delighting in God's creation. He spent his long retirement years dependent on the Lord and used his gifts to quietly and humbly expand God's Kingdom. He considered himself a very blessed man. He is survived by his wife, Vicki; daughter, Kimberly Alexander; son, James (Annette) Hudson; 2 granddaughters, Alexa Hall and Brooke Doherty; 2 brothers: Richard (Judy) and Robert (Nona) Hudson; 2 sisters: Janet Eary and Marge (Larry) Head; Sister-in-law, Linda (Jim) Grady; 10 nieces and nephews; 30 great nieces and nephews; and 1 great-great niece. He was preceded in death by his father, Garnett; his mother, Helen Zielke; and a step-brother, Justus. He was very much loved by his wife, family, friends and neighbors and he felt the same about them. Funeral Arrangements: Owen Funeral Home in Jeffersontown, KY has handled all the difficult arrangements and getting Jim home — they have been the greatest (owenfuneralhome.com). All arrangements will be at the Chapel In The Woods (a Southeast Christian Church campus) 1407 Moser Road, Louisville, KY 40299. Visitation is 9:00am to 11:00am Friday, January 31, 2020 with service to follow at 11:00am. Internment immediately following at Cave Hill Cemetery. In lieu of flowers: Jim's favorites — Southeast Christian Church (920 Blankenbaker Pkwy, 40243); Bob Russell Ministeries (bobrussell.org); Manual Alumni Association (120 West Lee St, 40208); Hospice (treasurehealth.org).

The family of James Eugene Hudson created this Life Tributes page to make it easy to share your memories.

Send flowers to the Hudson family.