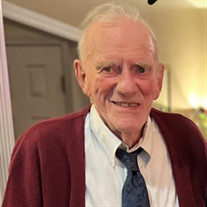 James Franklin Stewart, Jr., 93, of Louisville KY, passed away February 11, 2022. James was born, March 28th, 1928, in Duluth Minnesota, to his mother and his father James Franklin Stewart, Sr. At a young age he attended services on Sunday with his family at Eagle Lake Lutheran Church, in Battle Lake Minnesota. After He graduated high school, he went on to enlist in the United Sates Military and served during the Korean War. After he had concluded his service, he went on to become a maintenance foreman for American Synthetic Rubber Company and retired after 28 years. James loved sharing his time with friends and family. He enjoyed fishing, and golf, however, his favorite pass time was going to late night bingo with his daughter Desiree. His memory will be dearly cherished. James was preceded by his mother and his father James Franklin Stewart, Sr.; his wife, Mildred Stewart; brother, Harvey Stewart and his wife Jean; and sister-in-law, Carol. He is survived by his loving daughter, Desiree Lynn Stewart; grandson, Michael Stewart (Amy); brother, Donald Stewart; and good friends Mary and Wayne Nelson. Visitation will be held Tuesday, February 15, 3:00pm-8:00pm, at Owen Funeral Home, 5317 Dixie Highway, Louisville KY, 40216. Services will be held Wednesday February16, 10:00am, at the funeral home, entombment to follow at Louisville Memorial Gardens West.

The family of James Franklin Stewart Jr. created this Life Tributes page to make it easy to share your memories.

Send flowers to the Stewart family.