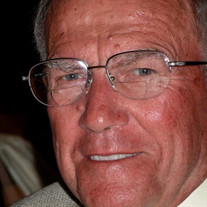 Joseph Reuben Roberts died quietly in his sleep in the early morning hours of February 3, 2022, lying beside his loving and devoted wife of 73 years, Alma (Graas) Roberts. “Jack” lived a long and happy life filled with friends and family. He grew up in Louisville playing sports with a neighborhood youth team, the Bloodhounds, about which he had many stories. He worked for the Louisville Gas and Electric Company for 41 years, first at the Waterside station, then at the Cane Run, Mill Creek and Trimble County sites. Beginning as a novice at age 21, he rose to be the Plant Manager at Mill Creek and ended his working career getting the Trimble County plant up and running. He retired in 1990. Jack and A throughout their marriage served as perfect role models for their four children: Dr. John Roberts (Dr. Janet Smith), George Roberts (deceased 1970), Teri Stephenson (Dennis, deceased) and Joseph Roberts (Tana). There were many, many family vacations throughout the country and the world and plenty of time spent at the family’s Rough River Cabin to create lasting memories for those he left behind. Jack was a quiet, outgoing, kind and gentle man. He rarely showed anger and never cursed. He always had some quip at the ready. He is sorely missed already. Jack was preceded in death by his mother, Elizabeth (Bessie) Steed, his father, Reuben James Roberts, and his son, George Alan Roberts. In addition to his wife and surviving children, he leaves behind to cherish all the memories, a sister, Carolyn Ormerod (Marvin), a brother, James Steed, (Mary Jo), ten grandchildren and eleven great grandchildren. Visitation will be on Monday, February 7th from 3 pm to 7 pm at Owens Funeral Home, 5317 Dixie Hwy, Louisville, KY. Mass will be held at Incarnation Church, 2229 Lower Hunters Trace, Louisville, on Tuesday, February 8th at 11 am. Burial at Calvary Cemetery will follow. The family wishes to acknowledge the compassionate help of Steve Smith and Marilyn McCarty during the final year of Jack’s life and for Hosparus in the final days. In lieu of flowers the family would appreciate donations to the Kentucky Spinal Cord Injury Research Center https://louisville.edu/kscirc) or to Neurofibromatosis 2 Bio-research (https://nf2biosolutions.org/).

Joseph Reuben Roberts died quietly in his sleep in the early morning hours of February 3, 2022, lying beside his loving and devoted wife of 73 years, Alma (Graas) Roberts. &#8220;Jack&#8221; lived a long and happy life filled with friends and... View Obituary & Service Information

The family of Joseph "Jack" Roberts created this Life Tributes page to make it easy to share your memories.

Joseph Reuben Roberts died quietly in his sleep in the early...

Send flowers to the Roberts family.