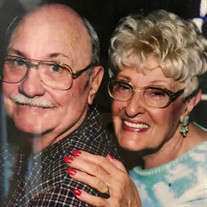 Pass, Marianne Karcher, 87, returned to her heavenly Father on April 9, 2021. Marianne was the most kind, sweet, caring person you would ever want to meet. She was a loving and devoted wife, mother, grandmother and great grandmother. A devout Catholic, Marianne had a true devotion to prayer and praying the rosary faithfully. She worked at the old Bacons for many years and was the owner of The Unicorn Tearoom in Jeffersontown in the 80’s. She had a love for camping and enjoyed the friendship of her camping family. She enjoyed reading books and has quite a collection. Marianne had a great sense of humor and her own schedule for time. To our dad, who spent many years waiting on mom, and willed that to all of us, we have a full heart knowing that you’ve been waiting on her and she is with you now. She was preceded in death by her husband of 63 years, William ‘Bill’ Pass; her parents, Joseph and Margaret Karcher; her brothers Albert and Robert Karcher. She leaves behind the cherished memories of her kind heart and beautiful soul, to her sister, Marty Owen; her sons, Mike (Chris), Tommy (Erin), Jim “Coots” (Sharon); her daughters, Sharon (Daryl), Joni (Laura), Kim and Mary Ann “Bugs” (Scott); her grandchildren, Nick Pass, Greg Pass, Tommy Pass Jr., Callie Pass, David Russell, Kyle Russell, Amanda Carcara, Jordan Pass, Erin Pass, Ryan Squires, Troy Squires and Erika Squires; 16 beautiful great grandchildren; a niece, Karen Martin; nephews, Kevin Karcher, Rex Owen and Carl Owen Jr.; and many loving friends and former neighbors. Mass will be held, Wednesday, April 14, 11:00am, at St. Edward Catholic Church, 9608 Sue Helen DR., Louisville KY, 40299. A visitation will be held Tuesday, April 13th, from 2:00pm-6:00pm at Owen Funeral Home - Jeffersontown, 9318 Taylorsville Road, Louisville KY, 40299. In lieu of flowers donations can be made to, Crohn's & Colitis Foundation, Attention: Take Steps 733 Third Avenue Suite 510 New York, NY 10017.

Pass, Marianne Karcher, 87, returned to her heavenly Father on April 9, 2021. Marianne was the most kind, sweet, caring person you would ever want to meet. She was a loving and devoted wife, mother, grandmother and great grandmother. A devout... View Obituary & Service Information

The family of Marianne Karcher Pass created this Life Tributes page to make it easy to share your memories.

Pass, Marianne Karcher, 87, returned to her heavenly Father on...

Send flowers to the Pass family.