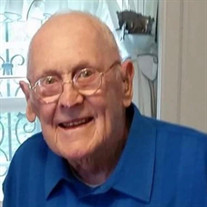 SCHRADER, Maurice Douglas, 96, passed away Sunday, May 30, 2021 at Sunrise of Louisville. Doug was born September 19, 1924 in Louisville, KY to the late Nellie and Paul Schrader. He attended Beechland Baptist Church in Louisville. Doug retired from B.F. Goodrich and enjoyed gathering with other “good timers” who also retired from there. Doug was a Veteran and former P.O.W. of World War II. He was preceded in death by his wife of 59 years, Peggie, who passed away February 12, 2021; and his parents. Doug is survived by a son, Scott Schrader (Holly); daughters, Judy Hall, Peggy Weber (Wayne), Vanessa Flannery (Denny), and Amy Taylor (David); grandchildren, Clay, Sydney, Doug, Jennifer, Lance, Emily, and Amanda; fifteen great-grandchildren; several nieces and nephews; and an extended loving family. The Schrader family wishes to thank Bob Johnson, Hosparus of Louisville and the staff at Sunrise of Louisville Assisted Living for their care and support given to our parents and us over the last several months. In lieu of flowers, donations may be made to the Honor Flight Bluegrass, PO Box 991364, Louisville, KY 40269-1364. His graveside service will be at 2 p.m. Thursday, June 3, 2021 at Louisville Memorial Gardens West Cemetery.

The family of Maurice Douglas Schrader created this Life Tributes page to make it easy to share your memories.

Send flowers to the Schrader family.