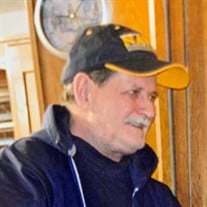 Michael Anthony Nix, 66, of Depauw Indiana, passed away March 23rd, 2022. Michael was born in Louisville KY, January 9th, 1956, to his parents Wilma and Marcell Nix. At the age of sixteen Michael began a long and fruitful career at Kroger company. During his time at Kroger Michael made the decision to enlist and proudly serve for the United States Navy. After his service, he once again joined his Kroger family and worked in various positions around the store. After many years of working for the Kroger company he retired as a receiving clerk. In his free time Michael enjoyed car racing, going to the casino, was a fantastic baseball player in his youth, enjoyed racing around in his golf cart and traveling with friends and family. Michael was preceded in death by his parents, Wilma and Marcell Nix. He is survived by his brothers, Ronald Nix (Kathleen) and Timothy Nix (Dawn); two nephews and their spouses; and three, great nieces and nephews. Donations can be made in Michael’s memory to St Jude Children’s Hospital, 501 St. Jude Place • Memphis, TN 381 and Wounded Warriors, Wounded Warrior Project, P.O. Box 758516, Topeka, Kansas 66675-8516. Memorial gathering will be held, April 2nd, 10:00am-12:00pm, at Owen Funeral Home – Dixie Highway, 5317 Dixie Highway, Louisville KY, 40216. Memorial service will follow the visitation at 12:00pm, at the funeral home.

The family of Michael Anthony Nix created this Life Tributes page to make it easy to share your memories.

Send flowers to the Nix family.