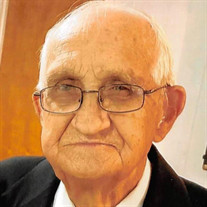 Rev. Murrell Robert Langdon, age 93, of Louisville, KY, passed away Wednesday, (January 26, 2022) at his residence. He was born on November 4, 1928 in Grayson Co., KY, the son of the late Lawrence L. and Sarah Ellen Oller Langdon. Bro. Langdon was Maintenance worker and was a member of the Shively Masonic Lodge # 951 who enjoyed woodworking and playing games. He was an Air Force Veteran. Bro Langdon was called to the ministry on November 15, 1960. He remained faithful to his calling for 55 years until his death and was a member of the Apostolic Faith Assembly. For 69 years, he’s been married to his wife, Edith Marie Clubb Langdon on August 3, 1951, who survives. He is also survived his two daughters, Patricia Ann Smith (Randell) of Leitchfield and Deborah Lynne Ware of Vine Grove, KY, five grandchildren, 6 great grandchildren, 8 great great-grandchildren and several nieces and nephews also survive. Other than his parents, he was preceded in death by three brothers, Rev. George Langdon, Elmer and Ed Langdon and three sisters, Essie and Cova Dennison and Sarah Jane Symmes. Funeral services will be at 1:00 p.m. EST Saturday, (January 29, 2022) at the Owen Funeral Home, 5317 Dixie Hwy in Louisville. Bro. Steve Williamson will be officiating. Burial will be in the Leitchfield Memory Gardens in Leitchfield KY. Visitation will be at the Owens Funeral Home from 3:00 p.m. to 8:00 p.m. EST on Friday and from 9:00 a.m. Saturday until time of services. The Dermitt Funeral Home in Leitchfield is in charge of the arrangements. Online condolences can be made in the guestbook on our website at www.dermittfuneralhome.com.

The family of Rev. Murrell Robert Langdon created this Life Tributes page to make it easy to share your memories.

Send flowers to the Landgon family.