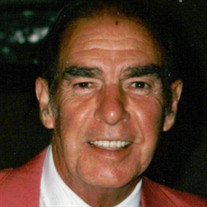 Paul Joseph Orrender, 88, of Louisville passed away Monday, February 14, 2022 at Treyton Oaks. He was born September 9, 1933 to his late parents, James Roy and Nanny Pearl (Gribbins) Orrender also preceded in death by a daughter, Debra Jane Orrender and seven brothers and sisters. Paul was a member of Larchmont Church of God Anderson, IN. graduate of the class of 1952 from Valley High School. He served his country in the United States Army, retired from Auto Releasing after 23 years of service and was the owner/operator of Orrender Moving & Storage for 16 years. He was quite proud of his record of 40 years of being church videographer, often personally delivering and visiting with recipients who could no longer attend. He was a brilliant light of a Christian example to many. His word was his bond. In business, his handshake was better than a contract... (though he insisted on the written word to releive the other party) His wisdom was often sought out for problem solving, life advice, peace-making and guidance. He had an abundance of patience and became the "rock" for most people who knew him long. He loved fiercely. He will be missed in like kind. Survivors include his beloved wife of 69 years, Myrtle Jane (Hunter) Orrender; two children, Paula Eichberger (Chris) and William “Joe” Orrender (Karen); four grandchildren, Cory Eichberger of Lou.,KY., Cameron Eichberger (Rachel) of Lou., KY., Ravin Arnold (Jason) of Ft. Thomas, KY., and Haley Bathiany (Bert V) of Lexington, Ky.; eight great grandchildren, Carigan, Ronan, Conrad,Jax, Bert VI, Sawyer, Aniston and Georgia. Visitation will be Thursday, February 24, 2022 11:00 A.M. – 1:00 P.M. and the funeral services will be held 1:00 P.M. Thursday at the Owen Funeral Home 5317 Dixie Hwy. with burial in Resthaven Memorial Park.

The family of Paul Joseph Orrender created this Life Tributes page to make it easy to share your memories.

Send flowers to the Orrender family.