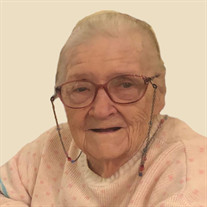 Pauline Cothron was called Home unexpectedly to the arms of her Heavenly Father on Saturday, December 26, 2020. She was born on November 15, 1925, the last daughter to parents James and Gertrude Coy. Growing up in the West End of Louisville, Pauline's early years were spent close by her Father's Barber Shop, and amongst a bustling household with brothers: Richard, JC, Eugene, Charles and sisters: Marge, Helen, and Dorothy. Pauline was a devoted wife to her late husband Clay Cothron; together they had the apple-of-their-eye son William "Bill" Clay Cothron. Pauline was known to all her family and friends for her selfless generosity, kind spirit, love for her pets (especially her dachshund Gus), and undying devotion to her family and grandchildren. She would lose both husband Clay in 1986 and son William in 2010, and her second husband Arthur Cerminera in 2014, all of whom remained dear to her heart for her remaining days. Pauline was a devout, lifelong Christian and a member of Hillview Community Church. She lived out her faith daily in her deep concern and compassion for people. Her generosity was seen by all who knew her whether it be through a kind deed or a handmade potholder. Pauline is survived by her daughter-in-law Barbra Cothron, grandchildren Kent Cothron, Camille Kuzman (David), and Blake Cothron (Rachel), great-grandchildren Gideon Cothron, Clay William Kuzman (named in tribute to Pauline's husband and son), and Channing Kuzman. Visitation is 10 AM to 2 PM this Saturday January 2 at Owen Funeral Home, 5317 Dixie Hwy, Louisville, KY 40216, with a Funeral Service (same day) at 2 PM. Interment will follow at Louisville Memorial Gardens West. The family requests that expressions of sympathy take the form of donations to one of Pauline's favorite charities: the Animal Care Society, 12207 Westport Road, Louisville, KY 40257 or or to Hillview Community Church, 5319 Dixie Hwy, Louisville, KY 40216.

Pauline Cothron was called Home unexpectedly to the arms of her Heavenly Father on Saturday, December 26, 2020. She was born on November 15, 1925, the last daughter to parents James and Gertrude Coy. Growing up in the West End of Louisville,... View Obituary & Service Information

The family of Pauline Cothron created this Life Tributes page to make it easy to share your memories.

Pauline Cothron was called Home unexpectedly to the arms of her...

Send flowers to the Cothron family.