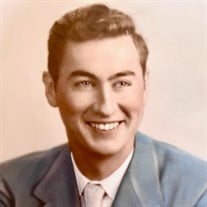 Robert Roger Swift, 86, of Louisville passed away Monday, April 18, 2022 at his home. Robert was born April 23, 1935 in Caneyville, Kentucky to his late parents, Phoebe Myrtle (Ingram) and William McKinley Swift. He had retired from Alcan... View Obituary & Service Information

The family of Robert Roger Swift created this Life Tributes page to make it easy to share your memories.

Send flowers to the Swift family.