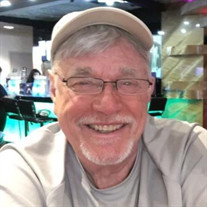 It is with great sadness that the family of Robert (“Bobby”) Franklin Wilbert III announce his passing on April 3, 2021. He died at the age of 72, while surrounded by his children after a long illness. Bobby will be remembered by many as a charming, charismatic man who could set others at ease with his smile and baritone voice; as a practical joker who gave magic marker mustaches to unsuspecting slumberers; as a teller of hilarious tales, some of them tall but most of them true; as a passionate man who loved falling in love; and as a complicated man who was sometimes difficult to know well, but who was warm and loving, and had a kind heart. His spirit was vast, and he contained multitudes. Bobby was a Marine Corps veteran of the Vietnam War. He struggled with PTSD, as so many veterans do, and his family admires him for learning to open up about that struggle. Proving that an old dog can learn new tricks, Bobby earned a bachelor’s degree in information technology from the University of Phoenix when he was 66, finally fulfilling a lifelong ambition he had once considered out of reach. He loved to dance, and watching him on the dance floor was a joy. He once jockeyed an ostrich in an exotic animal race, and he loved telling stories about his youthful hijinks with his siblings. As befit his personality, his grandchildren lovingly call him “Boompah” or the well-earned title of “Grand Pirate”. They will be sure to carry on his hijinks with the same devilish and endearing grin that captured all our hearts. Bobby was, ultimately, a flawed and wonderful human who loved deeply, and his family and friends will regale one another with stories of his escapades and his love for decades to come. Bobby was preceded in death by his father, Robert “Big Bob” Wilbert Jr and his brother, Gary Wilbert. He is survived by his mother, Doris Wilbert; his sisters Beverly White, Vicky Gillespie (Tom), Sandy Hourigan (Jim), and Donna Nord (Greg); his children Todd Wilbert (Tabby), Michele Jasne (Adam), Joshua Wilbert (Stefanie), Zachary Wilbert (Brittany), and Adam Wilbert (Amy); and his Grandchildren Erika, Tyler, Conner, Eli, Hank, Ashlynd, Jackson, Hallie, Sophia, and Lilly; and many others who love him. A celebration of his life will be held on Thursday, April 8 from 6:00 pm to 9:00 pm, at Owen Funeral Home, 5317 Dixie Highway, in Louisville. A funeral mass will follow on Friday, April 9, at 10:00 am at St. Paul Catholic Parish, 6901 Dixie Hwy in Louisville. In lieu of flowers, the family requests that donations be made to the PTSD Foundation of America.

It is with great sadness that the family of Robert (&#8220;Bobby&#8221;) Franklin Wilbert III announce his passing on April 3, 2021. He died at the age of 72, while surrounded by his children after a long illness. Bobby will be remembered by... View Obituary & Service Information

The family of Robert F. Wilbert III created this Life Tributes page to make it easy to share your memories.

It is with great sadness that the family of Robert (“Bobby”)...

Send flowers to the Wilbert family.