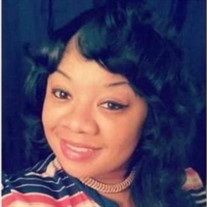 MCELROY, Terdara, was born on August 17, 1991 to Yolanda McElroy and Darrell Taylor in Louisville, KY. She was the oldest of two children, Terdara McElroy and Terry LaRue, Jr. She was blessed to have Darrell Taylor as a father and Terry “Bubby” LaRue, Sr. as a daddy that she loved. She was preceded in death by her grandparents, Vickie Lynn McElroy, Joseph William Lancaster; uncle, Keith McElroy; aunt, Marqurita McElroy; cousins, Monyell Daniell and her favorite, David McElroy; and her grandfather, Robert Taylor Sr. She leaves to cherish her memory, her mother, Londa McElroy; father, Darrell Taylor; daddy, Terry “Bubby” LaRue, Sr.; brothers, Terry LaRue, Jr., Quinten Mitchell, Brandon Stowe, and Darrell Taylor, Jr.; sisters, Carmen Mitchell, Kaelyn Taylor, Brittany Taylor, Aramenta Gueije, and Kaden Davis; a host of cousins; aunts; and uncles; and grandmother, Sunday Taylor. Terdara gave her life to Christ at an early age. She attended St. Stephens Baptist Church when she could. She graduated from Central High School where she was on the step team. She attended WKU and U of L where she graduated with a Bachelors Degree in Communications. Terdara’s career path led to JCYC for 5 years until they closed, she then started tutoring children, which she loved. She was such a light and always found the good in people no matter what. She had a BIG heart. She loved her nephew, Kingston LaRue so much, he was always with her. Terdara would always tell her mother, “I don’t know what I would do if you leave”, but unfortunately it was the other way. Her funeral service will be at 2 p.m. Saturday, April 30, 2022 at Owen Funeral Home, 5317 Dixie Hwy. Visitation will be from 12 p.m. until time of service Saturday at Owen Funeral Home.

The family of Terdara McElroy created this Life Tributes page to make it easy to share your memories.

Send flowers to the McElroy family.