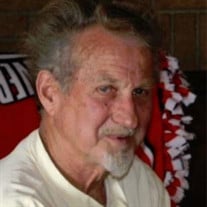 William Nile Wheeler, 87, passed away Monday January 31, 2022. Born November 17, 1934 in Breeding, KY and lived in Scottsburg, IN for over 20 years. He retired from Lorillard Tobacco Co. and was a body man by trade. He had a love for drag... View Obituary & Service Information

The family of William Nile Wheeler created this Life Tributes page to make it easy to share your memories.

Send flowers to the Wheeler family.