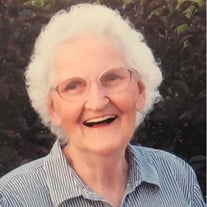 DYE (Roth), Anna Katheryn, 90, of Louisville, passed away on Feb. 12, 2022. Born in Louisville’s Portland neighborhood, she was the youngest of ten children. She grew up on Duncan Street and attended St. Cecelia’s Catholic School through eighth grade. She attended Ahren’s Vocational School. Anna is preceded in death by her husband, Charles B. Dye (1972), a WWII Army veteran, who served in the Philippines and their sons, Dennis and Dwight; her parents, Christine M. Nix and Frank R. Roth, Sr., and her brothers and sisters. She is survived by sons David (Sue) and Daniel (Judy) and daughters Jordan (John), Janice (Christopher), and Janeen; grandchildren Dave, Tia’Marie, Katheryn, Chase, and Elise; great-grandchildren Liam, Stella, and Emerson; and sister-in-law, Peggy (Dye) Thomas. She enjoyed her childhood in Portland. Cars were few and neighborhood children, forming a chain, roller-skated up and down Duncan Street. Other times, girlfriends met on the side porch of her parent’s shot-gun house to play jacks. She remembered her older brothers serving abroad during WWII and the train station on Broadway overflowing with soldiers. Though sometimes miles separated them, she was close to her siblings, Thurman, Jake, Anita, Lawrence, Mary Agnes, Christine, Frances, Frank, Jr., and Ernie and missed them terribly in her older years. Anna was kind-hearted and strong-willed. Her Catholic faith and faith in God were important to her. She was blessed with a beautiful voice and a creative impulse that found expression throughout her life. She enjoyed thrift-store shopping with dear friends, Libby Lundsford (deceased), and Helen Clayton of New Albany. She was a friend to animals and watched over family pets, Rascal, Bella and Bonbon. Anna lived her last years with Janice and Janeen in the Iroquois Park area where she stayed active with her family and especially enjoyed her great grandchildren. She enjoyed trips to Iroquois Park and sitting on the back deck admiring nature. Anna was self-employed over 25 years as a private-duty Certified Nursing Assistant in Louisville. She continued as a CNA in Clearwater, Florida in the 1990s. She was a dedicated caregiver to her patients. After returning to Louisville in the early 2000s, she worked at Caesars Casino in New Albany. She especially enjoyed interacting with her co-workers and guests. Visitation for family members will be from 3 to 8 p.m. on Monday, Feb. 14 at Owen Funeral Home at 5317 Dixie Highway. She will be buried beside her husband Charles. Masses will be said in her name at a later time.

DYE (Roth), Anna Katheryn, 90, of Louisville, passed away on Feb. 12, 2022. Born in Louisville&#8217;s Portland neighborhood, she was the youngest of ten children. She grew up on Duncan Street and attended St. Cecelia&#8217;s Catholic School... View Obituary & Service Information

The family of Anna Katheryn (Roth) Dye created this Life Tributes page to make it easy to share your memories.

Send flowers to the Dye family.