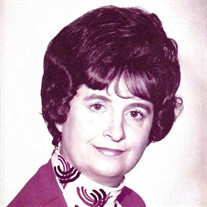 On the morning of January 13, 2022, Colleen Triplett Atwell, age 90, passed away at The University of Louisville hospital of natural decline of life following a stroke. Colleen was born to Grace Hopper and Harry Triplett on January 24, 1931, in Frankfort, Ky. In her teen years, Colleen quickly became the household provider for her family, to whom she was entirely dedicated, beginning in her challenging youth, and transcending throughout the entirety of her life. At the age of 23, she married her lifelong love Richard Carl Atwell, with whom she spent 67 years of marriage. She then became a mother to her daughter and only child, Tammy Kay Ailiff in 1957, who now survives her in life along with her son-in-law, Anthony Ailiff, granddaughters, Meredith (Michael Adams) and Morgan Ailiff. Survived as well by cherished sisters, Betty Joe Rice, Sue Henderson, and nephew, Ronald Cunningham. Colleen was known to be fiercely loyal, fiercely giving, and fiercely opinionated. Colleen was a warrior woman of God, though she never would have claimed it. In her early life her favorite activities and pleasant memories, which she often recounted with family, were of her time swimming at the beach and roller-skating with friends. She loved people in general, but above all Jesus Christ. Colleen was a dedicated member of Ormsby Heights Baptist church and cared deeply for her church family as well. There are a great many people in the world, but there are some who leave a mark that will forever remain. For her family, she was a safe place, a role she reveled in. She left a legacy that will remain instilled in the hearts of those who knew her all throughout their lives. “So, with you now is your time of grief, but I will see you again and you will rejoice, and no one will take away your joy.” – John 16:22 Colleen’s funeral service will be at 11:00 a.m. Saturday, January 29, 2022, followed by burial at 2:00 p.m. at Frankfort Cemetery, Frankfort, KY. Visitation will be from 4:00 – 8:00 p.m. Friday at Owen Funeral Home, 5317 Dixie Highway.

On the morning of January 13, 2022, Colleen Triplett Atwell, age 90, passed away at The University of Louisville hospital of natural decline of life following a stroke. Colleen was born to Grace Hopper and Harry Triplett on January 24, 1931,... View Obituary & Service Information

The family of Colleen Triplett Atwell created this Life Tributes page to make it easy to share your memories.

Send flowers to the Atwell family.