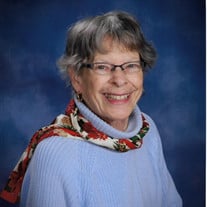 Dorothy Shirley Meekins Cesler, 88, of Louisville, KY, passed away on Wednesday, August 18, 2021, in the company of her six children who circled her in stories, songs, scripture, prayer, and celebration during her final hours. Shirley was born April 11, 1933, to her parents, Earle Howard Meekins and Nellie MacMichael Meekins, in West Branch, New Brunswick, Canada. Oldest of three, Shirley’s early places of residence were determined by her father’s assignments in the US Forestry Service with stops along the way in Harrisonburg, VA; Valley Bend, WV; Berea, KY; McKee, KY; and ultimately to Williamsburg, KY, where most of her formative years were spent. After graduating from Willamsburg High School, she attended Cumberland College and then Bethesda Nursing School in Cincinnati, OH, where she graduated in 1955. It is there in an Over-theRhine chapel that Shirley met Richard P. Cesler, soon marrying and assuming the responsibilities of a Methodist preacher’s wife in such locations as Allen MI, Hoagland, Poe, Greenville, and Galena IN, all the while nurturing a family of six children. Shirley worked as a registered nurse for over three decades at hospitals in Indiana and Louisville: Marion General, Baptist Healthcare Floyd, Highlands Baptist, and Baptist Health East. In addition, Shirley served as a reading recovery aide at Shawnee Elementary. She devoted her life caring for others. Shirley enjoyed spending time with her children, grandchildren, and great grandchildren. Her love for Jesus, family, and country were unmatched. She brought joy to those in her presence and showered love and compliments to any and all – friend or stranger. People left being in a better place after visiting her than they were before. Shirley was an enduring example of God’s unconditional love. She regularly attended Shively Baptist Church, singing in the Senior Adult Ministries Choir along with supporting many causes, but most notably, Right-to-Life of Louisville. Shirley also enjoyed ice skating, swimming, playing piano and the accordion, and cheering on the Cincinnati Reds. She was preceded in death by her parents; sister, Bessie Janet Loring; and brother, Earle Mac Meekins. Survived by her children, Stephen Michael Cesler (Judith), Susannah Janelle Mullally (Brendan), David Earle Cesler, Jonathan Richard Cesler, Margaret Elizabeth Sandefur (Terry), James William Cesler (Paris); 14 grandchildren and 9 great grandchildren…as well as many loving nephews and a niece. Visitation will be held on Friday, August 27th, 4:00 P.M.– 8:00 P.M. at Owen Funeral Home, 5317 Dixie Highway, Louisville KY. A service will be held Saturday, August 28th, 12:00 P.M. at Shively Baptist Church, 1599 Sadie Lane, Louisville KY. The family has requested that in lieu of flowers to please direct any donations to either Saint Jude Children’s Research Hospital or Right-toLife of Louisville.

Dorothy Shirley Meekins Cesler, 88, of Louisville, KY, passed away on Wednesday, August 18, 2021, in the company of her six children who circled her in stories, songs, scripture, prayer, and celebration during her final hours. Shirley was... View Obituary & Service Information

The family of Dorothy Shirley Meekins Cesler created this Life Tributes page to make it easy to share your memories.