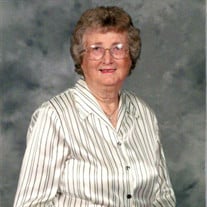 Elnore Kerr Robinson was born February 8, 1930, in Edmonson County, the eldestof the two daughters of Marion F. and Pernie L. Hughes Kerr. She passed peacefully at home on March 28th, 2021. During a revival at Union Light Missionary Baptist Church that Brothers Johnnie Jones and Andrew Hester were holding, she was saved. She told of the time when she saw her mother coming down the isle toward her, she knew at that moment she was lost. She made her way to the alter, and while the song “I Feel Like Traveling On” was being sung, the Lord blessed and saved her. Brother Andrew Hester baptized her, and she joined Union Light Missionary Baptist Church. Soon after the family moved to Louisville, and in July 1955 she moved her membership to First United Baptist Church (Longfield) and remained a member until her death. On June 8, 1947, she married William Robinson, Jr., and to this union were born a daughter, Glenda Faye, and a son, William Wayne (Billy). Her friends and family will always remember her as a faithful wife, loving mother and devoted friend. She loved spending time in the garden, was an exceptional bowler, traveled across the world and was a devout member of the Eastern Star. Her memory will be cherished by all whose lives she touched. Preceding her in death were her parents, Marion F. and Pernie L. Hughes Kerr; husband William Robinson, Jr.; sister, Ella Rhea Kerr Smith; son, William Wayne (Billy); and her grandson, Stephen D. Durbin, Jr. She leaves behind her daughter, Glenda Faye Riggs; great-grandson Brent Lee Durbin (Kayla); one niece and one nephew. Visitation will be held on Thursday, April 1, from 1pm-7pm at Owen Funeral Home – Jeffersontown, 9318 Taylorsville Rd, Louisville Ky. Funeral service will be held on Friday, April 2, 12pm, at First United Baptist Church, 5507 Cartledge Court, Louisville Ky, a visitation will be held from 10am until time of service. Burial to follow at Resthaven Cemetery,4400 Bardstown Rd, Louisville Ky.

The family of Elnore Kerr Robinson created this Life Tributes page to make it easy to share your memories.

Send flowers to the Robinson family.