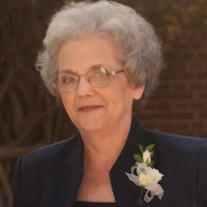 Eva Ruth Twyman Reynolds, age 79, of Louisville, passed away on Sunday, July 11, 2021. She was born in Monroe, Kentucky on September 15, 1941 to her late parents, William Goebel and Ruby Twyman. She grew up in her parents' general store, Twyman’s Grocery, in the small town of Monroe in Hart county Ky. In her younger years she was a Majorette, and headed her own Rockabilly band, The Rhythmettes, that toured during the 1950s playing TV and radio. She attended nursing school at Norton’s and worked in Medical research as a Clinical Coordinator Assistant for the UofL Medical School in the department of GI Hepatology and Nutrition. She was a longtime member of Beechland Baptist Church and at one time served as the Youth Sunday School Leader with her husband. In her spare time, she enjoyed sewing and became an accomplished seamstress and clothing designer. She and her late husband could often be found at either an antique shop or a Bluegrass Festival on the weekends. Her happiest times were spent as a wife, mother, grandmother and great grandmother. She especially loved her last few years spent with her great granddaughter, Emmy, who was her constant companion. In addition to her parents, she was preceded in death by her husband, Ray Wilson Reynolds; son, Britt Twyman Reynolds; brothers, Herbert, Neulon, and Terry Twyman; sisters, Orthelia Stinson and Norma Loy; and two sister-in-laws, Frankie and Edith Twyman. Eva is survived by her daughter, Lark Reynolds Craven (David); brothers, Miley Twyman (Linda), Reggie Twyman (Brenda); sister, Patsy Meredith (“Bud”); grandchildren, Madison, Lilly, Garrett, Copper, Radley, Price, Bishop, and Ledger Reynolds; and one great-grandchild, Emmaline Reynolds. Funeral services will be at 4:00 PM on Wednesday, July 14, 2021 at Owen Funeral Home, 5317 Dixie Hwy. Louisville, KY 40216. Burial will follow at a later time at Cave Hill Cemetery. Visitation will be from 2:00 - 4:00 PM before the service and until 6:00 PM after the service at Owen Funeral Home. Expressions of sympathy may be made to Beechland Baptist Church.

Eva Ruth Twyman Reynolds, age 79, of Louisville, passed away on Sunday, July 11, 2021. She was born in Monroe, Kentucky on September 15, 1941 to her late parents, William Goebel and Ruby Twyman. She grew up in her parents' general store, Twyman&#8217;s... View Obituary & Service Information

The family of Eva Ruth Twyman Reynolds created this Life Tributes page to make it easy to share your memories.

Send flowers to the Reynolds family.