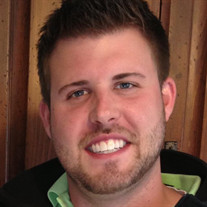 Evan Walker Zettwoch, age 33 of Louisville, Ky, passed away peacefully in his home on March 5th of 2021. He is survived by his daughter, Aubrey Anne Warren, parents Larry and Dennie Zettwoch, sister Allison Zettwoch, nephew Skylar Poisson-Zettwoch, and a wide extended family, and many, many close friends. Evan was born January 6, 1988. He graduated from St. Xavier High School where he swam competitively for three years. He went on to run many successful businesses as a serial entrepreneur. In his early 20s he built a landscaping business, and followed that with a successful moving company, at one point being voted the "best moving company in Louisville." Evan had a magical energy about him. Just being in his presence immediately lifted everyone’s spirits. His joy for life was contagious and you could see it in his infectious smile and hear it in his bear laugh that filled the room. Evan was an award winning fisherman. He loved boating, spearfishing, diving in the Florida Keys and often spoke of Florida as his favorite place in the world. He was a lover of fast cars, a patron of many local artists, held a black belt in Taekwondo and had achieved the rank of Eagle Scout. Above all else he loved his beautiful daughter Aubrey more than anything in the world. His brightest moments were talking about or spending time with Aubrey. A celebration of Evan's life will be held Saturday the 20th at Owen Funeral Home on Dixie Highway, from 1-3 pm. It was Evans wish to be cremated and have his ashes spread over his favorite favorite fishing spots on the reefs of the Florida Keys In lieu of flowers, condolences can be sent to ‘The Aubrey Anne Warren Trust’ ℅ Centennial Bank, po box 949, Islamorada, FL 33036, established in support of Aubrey, who was and always will be, the most important thing in his life.

The family of Evan Walker Zettwoch created this Life Tributes page to make it easy to share your memories.

Send flowers to the Zettwoch family.