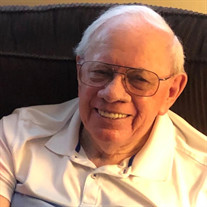 James Reber passed away the evening of June 15, 2022 at the age of 87 in Louisville, KY. He was born in November of 1934 in Taylorville, IL to the late Everett and Gladys Reber. He graduated from Taylorville High School in 1952 and Baptist Bible College in 1957. James became the founder of Janesville Bible Baptist Temple in 1957 and Oakhill Christian School in 1972 both in Janesville, WI. He later retired as a general manager from Kentucky Farm Bureau Insurance. James enjoyed hunting, fishing and golf. In his younger years he was an amatuer boxer. He was passionate about football and loved the Green Bay Packers and the UK Wildcats. He was a charismatic, people person and was never happier than when interacting with others. James said he wanted to be remembered as “a servant of the Lord.” He was a longtime member of Shawnee Baptist Church. James was preceded in death by his sisters Dorthy Repscher and Mary Beck, his brother, Robert Reber, his step-sons Johnny Wyss and Ray (Tig) VanNatta Jr., and his grandson Joel Mattison. He is survived by his wife Lois Reber, his brother Thomas Reber, his children Roy (Tammy) Reber, Bobbie Fortney, and Becky (Kirk) Ruppert and his step-children Angie (Gary) Mattison, Terri (Jerry) Dampier, and Tammy (Terry) Huttenlocher. His grandchildren are Abigail Reber, Joshua Reber, David (Britny) Fortney, Jamie Fortney, Adam (Jubilee) Ruppert, Danielle Ruppert, Jessica (Dale) Carman, Nicoal (Jared) Steinmann, and Steven Keen Jr. His great-grandchildren are Izabelle Reber, Luke Ruppert, Hunter Carman, Haley Carman, Blake Steinmann and Paige Steinmann. Public visiting hours will be held at 10 a.m. followed by the funeral service at 1 p.m. on Monday, June 20 at Owen Funeral Home, 5317 Dixie Hwy, Louisville, KY 40216. His final resting place will be at Bethany Cemetery. In lieu of flowers the family requests donations in his memory to the Alzheimer’s Association https://www.alz.org/?form=alz_donate

James Reber passed away the evening of June 15, 2022 at the age of 87 in Louisville, KY. He was born in November of 1934 in Taylorville, IL to the late Everett and Gladys Reber. He graduated from Taylorville High School in 1952 and Baptist Bible... View Obituary & Service Information

The family of James Reber created this Life Tributes page to make it easy to share your memories.

Send flowers to the Reber family.