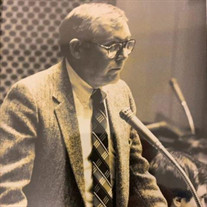 James Bernard Yates Sr., 92, of Louisville passed away Sunday, April 25, 2021 from Alzheimer’s. James was born April 5, 1929 here in Louisville to his late parents, William Patrick & Mary Lennie (Livers) Yates. He was a member of Mount Carmel and Incarnation Catholic Churches, American Legion Post # 220 a U. S. Army Veteran of WWII. He had an incredible life, punctuated by service to his country, state, church and family. In March of 1945, a few weeks before his 16th birthday he falsified his age and enlisted in the Army, following in the steps of his two older brothers. Jim Yates proudly marched in Veterans Day parades in the City. A Louisville Professional Firefighter, who at 26 years old he got his GED and enrolled at Bellarmine working a fulltime job on 3rd shift to support his family and went to classes in the day. At age 31 he received his Bachelor’s degree from Bellarmine College. In 1968 he was elected to Shively City Council where he served 2 terms before being elected State Representive for the 44th legislative district ( Shively & Southwest Jefferson Co.) in a special election to finish an unexpired term, then won 11 more consecutive elections, serving his community in the General Assembly for 23 years. He also worked as Executive Director for the MCA (Mechanical Contractors Association) as a liasion between the Plumbers & Pipefitters unions and their contractors. Honesty was his creed, his word was gold. Jim Yates stood by his word, helped people whenever he could (which was often), never feared the consequences of doing the right thing, and lived his life with honor and intergrety. Preceded in death by his first wife, Doris Durham; three brothers, Charles, Earl and Kenneth Yates. Survivors include his wife, Wanda Jewell (Shofner) Yates; four children, James B. Yates (Diana), William Patrick Yates, Charles Edwin Yates (Karen) and Steven Sharp (Alene); two sisters, LaVerene Parrish and Joanne Swan; 7 grandchildren, 6 great grandchildren and 2 great great grandchildren. A funeral mass will be held 11:30 A.M. Thursday at the Incarnation Catholic Church 2229 Lower Hunters Trace with burial in Saint Michael Cemetery. Visitation will be 3:00 – 8:00 P.M. Wednesday and 10:00 11:00 A.M. Thursday at the Owen Funeral Home 5317 Dixie Hwy. Memorial gifts to Hosparus of Louisville or Alzheimer’s Association.

The family of James Bernard Yates Sr. created this Life Tributes page to make it easy to share your memories.

Send flowers to the Yates family.