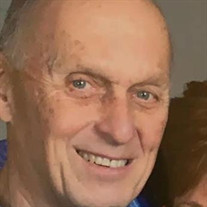 Kenneth "Kenny" Robert Kolb was born on December 12, 1947 to the late Clarence Thomas Kolb and Emily Gohmann Kolb. He passed from this life to be with the Lord on January 24, 2022. This past month he showed his strength and courage in facing life challenges. He has always represented this to his family throughout his lifetime. Despite all he was facing, he showed us a true hero and stayed strong till the end. As a child, Kenny was a little mischievous. As he grew, he showed so many his amazing artistic talents. He met the love of his life in High School, Rosemarie Vish at Junior Achievement. He was a veteran of the Army Reserve. They were married in 1969 and started a family. This was where we see his biggest life achievement. He was meant to be a Dad and a Pop. He was the most amazing man. His family and friends have been so blessed. He was kind, gentle and gave his children and grandchildren all he had. He was a great friend to all he met because he never met a stranger. Everyone has said “He treated us like family.” He was always a phone call away and always willing to help. He never had a bad word to say about anyone, unless he was driving behind you. He will be remembered as a loving father, grandfather, husband and friend. He was preceded in death by Emily and Clarence (Colby) Kolb. He is survived by his wife Rosemarie; his 3 children, Kimberly (Lynn), Bobby (Kristan) and Kris (Sarah); his 7 grandchildren Mason, Zachary, Kayla, Austin, Lily, Savanah and Liam; his brother and two sisters Tom (Cathy), Kay and Linda (Cope). Visitation will be held at Owen Funeral Home located at 9318 Taylorsville Rd in Jeffersontown, Ky on Friday, January 28, 2022 from 2pm to 7pm. The Funeral service will be held on Saturday, January 29, 2022 at 10am at St. Martha Church located 2825 Klondike Ln., Louisville, Ky 40218. In lieu of flowers, the family is asking for donations to be sent to Meredith Dunn School in Louisville, Ky.

Kenneth "Kenny" Robert Kolb was born on December 12, 1947 to the late Clarence Thomas Kolb and Emily Gohmann Kolb. He passed from this life to be with the Lord on January 24, 2022. This past month he showed his strength and courage in facing... View Obituary & Service Information

The family of Kenneth "Kenny" Robert Kolb created this Life Tributes page to make it easy to share your memories.

Send flowers to the Kolb family.