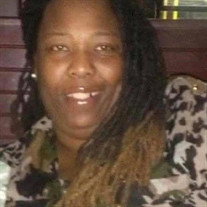 Rhonda Shevelle Johnson was born on June 23rd, 1973, to Geneva Jernigan Tyler Johnson and Ronnie Cleveland Johnson. She was the eldest of all her siblings. Rhonda was God-fearing witnessing her faith through her acts of kindness and genuine... View Obituary & Service Information

The family of Rhonda Shevelle Johnson created this Life Tributes page to make it easy to share your memories.