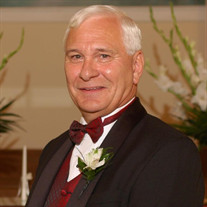 Robert D. Bishop, 72, of Louisville KY, passed away, April 16th, 2022. Robert was born in Louisville KY, September 10th, 1949, to his parents Margaret and William Bishop. Growing up Robert attended and graduated from Saint Xavier High School. After graduation, he enlisted and proudly served as a Marine in the United States Marine Corps during the Vietnam War. After his service he went on to work as a driver for the UPS company and after 25 years decided to retire. Robert was a member of the Millcreek V.F.W post number 5421, where he assisted with work around the facility, enjoyed BBQing, and spending time with his fellow V.F.W members. He was an avid UofL fan and enjoyed watching the games with his friends and family. Robert was a devoted father, grandfather, great grandfather, and a loyal friend. His memory will be cherished. Robert was preceded in death by his parents, Margaret, and William Bishop; brother, William P. Bishop; and sister Mary Margaret Gunderson. He is survived by his children, Angela Lewallen (Robert), Andrea Mason (Travis), Bobbie Bishop, and Brandon Bishop; sister, Daryl Beckman; brother, Joseph E. Bishop; grandchildren, Kayla, Chastity, Austin, Selena, Xavier, and Gabriel; great grandchildren, Kali, and Ash; his longtime friend Bill Stanley and many loving friends and family. Visitation will be held on Saturday, April 23rd, 9:00am-1:00pm, at Owen Funeral Home, 5317 Dixie Highway, Louisville KY, 40216. Service will follow the visitation at 1:00pm with burial to follow at Louisville Memorial Gardens West.

The family of Robert D. Bishop created this Life Tributes page to make it easy to share your memories.

Send flowers to the Bishop family.