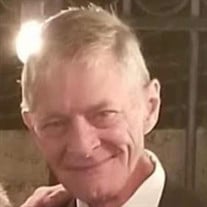 Steven (Slick) Schlicher, 72, a native of Louisville, Kentucky passed away January 31, 2022, surrounded by his family at his home. Born on October 10, 1949, in Fort Knox, Kentucky, he was of the Pentecostal faith, a graduate of Pleasure Ridge Park High School, and a U.S. Army Vietnam Veteran. Steve was a Vietnam Veteran and most proud of his Army Service from 1967-1970. He was the owner of Slick’s Tavern for 12 years and taxi owner/operator for 20 years. Steve had a great love for music and was an AWESOME guitar player... when he played, he felt it to his bones, and it showed on his face. I guess you could say that Steve marched to his own beat with his quirky ways, movie quotes “This Means Something”, inside jokes, and the ability to make you follow along with his fun … no matter how silly it was. He was a weather watcher, a fan of horse racing, and U of L … lover of Krispy Kreme donuts and green beans.... He will be sadly missed but remembered joyfully and often. Rest Easy Slick until we see you again…. we love you. Steve is sadly preceded in death by his son, Michael Bennett, and his parents, Richard Schlicher and Carrie Griffith Schlicher. He is survived by his wife, Effie Schlicher; 3 daughters, Jessica Schlicher (Cedric) Madeira Beach, Florida, Lisa Hensley (Stewart) Liberty, Kentucky, Shelly Rigney Bacon (Michael) Louisville, Kentucky; daughter in law, Kim Bennett West Chester, Ohio; nine grandchildren, Brittany(Michael), David Lee, Justin, Nick(Allie), Annaliza(Marcell), Danny, Cameron, Drake, Morgan and 4 great-grandchildren, Michael, Devon, Mattie, and Aubree; brother, Gary Schlicher (Vicky); sister, Cindy Dunn (Danny), and nieces, nephews and friends. Graveside services will be Monday, February 28, 2022, at 1:30 pm, at Kentucky Veterans Cemetery Central 2501 N. Dixie Blvd. Radcliff, KY 40160.

Steven (Slick) Schlicher, 72, a native of Louisville, Kentucky passed away January 31, 2022, surrounded by his family at his home. Born on October 10, 1949, in Fort Knox, Kentucky, he was of the Pentecostal faith, a graduate of Pleasure Ridge... View Obituary & Service Information

The family of Steven (Slick) Schlicher created this Life Tributes page to make it easy to share your memories.

Send flowers to the Schlicher family.