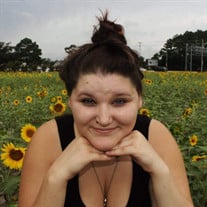 Tessa Ruth Gartin (known on social media as Asset Nitrag), age 28, of Louisville, KY died Saturday, March 5, 2022 at their home in Louisville. Tessa’s pronouns are they/them. Tessa grew up mostly in Louisville after having moved from Clarksville, IN at the age of 6. Tessa attended the Academy for Individual Excellence, Fern Creek High School, and the Christian Education Consortium. Due to medical issues, Tessa was unable to graduate, but completed their GED a few years later. As a youth, Tessa was active in their church, Southeast Christian Church and later Okolona Christian Church, singing with the youth worship team, shepherding younger church members and performing several times in Southeast’s Easter Pageant. Tessa also joined Louisville’s charter troop of American Heritage Girls, a scouting organization. Tessa was very active in AHG and learned or honed many skills like leadership and outdoor survival skills in their 8 years of scouting participation. Tessa achieved AHG’s highest award, the Stars and Stripes Award, in December of 2011. Tessa was the first AHG scout in all of Louisville to earn this award. The skills and character traits they developed there helped prepare them for the many roles they would take on as an adult. As an adult, Tessa pursued honesty and integrity in their life and their relationships. Therefore, they came out and became an active member in the LGBTQ+ community, a voice for the marginalized and a servant leader to the spiritually wounded. Tessa was often seen as an empath, someone gifted and trained to sense the pain and needs of others. Tessa was always creative, first through singing and various forms of visual arts, while also developing a passion for the spoken word style of poetic expression. This was particularly noteworthy, as Tessa suffered from dyslexia all their life and had great anxiety related to writing for someone else to see and reading in public. Despite that, in 2015, Tessa competed in the first Lipstick Wars poetry slam at the Bomhard Theater at the Kentucky Center for the Arts in front of a standing-room only crowd. They were so busy encouraging someone backstage that it took a few seconds to realize the crowd was waiting for them, as they had won! Tessa continued to perform in local and regional poetry slams, making friends and meeting poets from around the world. They most recently submitted a collection of poems (a chapbook titled Confessions of an Iceberg) to ButtonPoetry.com, an online poetry site that seeks to advance the work of poets around the world, for an annual contest that publishes and promotes the winning poet’s work. We are awaiting the results and hope that Tessa may be recognized posthumously so their works will be available for more people to enjoy. After several years of self-medicating with drugs and alcohol to minimize the symptoms of their mental illness, Tessa chose to live a life of sobriety. Tessa approached the challenge of true sobriety (incorporating mind and body) like they did everything they wanted to achieve: head-on, fully committed, with grit and dogged determination. They became a very active member of Louisville’s AA/NA community, planning events, participating in hosting committees, and sponsoring scores of other members. Last September, Tessa celebrated 5 years of sobriety. Because Tessa’s life was centered around the recovery community, they were preceded in death by far too many to list. Because Tessa felt deep, abiding love for so many with whom they came into contact, they are survived by more than we can possibly count. In lieu of flowers, please donate your time, your talents, and your money to someone who is hurting. Challenge yourself to do it daily. That would be the greatest way to show your love for Tessa. If we do that, their presence will never leave us. A time to honor Tessa Gartin: Sunday, March 13th, 2022 at The Tim Faulkner Gallery, 991 Logan Street. Visitation starts at 2pm. Memories and readings from Tessa's work will begin at 3pm.

Tessa Ruth Gartin (known on social media as Asset Nitrag), age 28, of Louisville, KY died Saturday, March 5, 2022 at their home in Louisville. Tessa&#8217;s pronouns are they/them. Tessa grew up mostly in Louisville after having moved from... View Obituary & Service Information

The family of Tessa Gartin created this Life Tributes page to make it easy to share your memories.

Send flowers to the Gartin family.