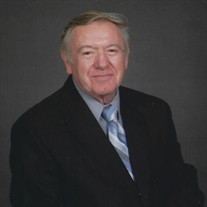 William “Sonny” C. Gibson, 84, of Louisville KY, passed away, March 2nd, 2022. He was born July 22nd, 1937, in Louisville KY. William was born in Louisville KY, July 22nd, 1937, to his parents Mildred and Anderson “Bud” Gibson. He graduated from DuPont Manual high school, he went on to attend and graduate from the University of Louisville J.B. Speed School of Engineering with his BSEE. He worked for LG&E, as an electrical engineer and manager. William was also a master electrician in the Louisville Metro Area with his father and son. He was a member of the IEEE, enjoyed showing his mustang with the Fall City Mustang Club and was a member of the Electrical Clearing House of Louisville. William cherished every moment he shared with the love of his life Patricia Ann Gibson, with whom he shared 65 years of marriage. He loved spending time with his son and daughter and made a lasting impression on all his friends and family. He is preceded in death by his parents Mildred and Anderson Gibson. He is survived by his wife of 65 years, Patricia Ann Gibson; children, Donald Gibson (Lisa), and Deborah Sue Golando (Daniel); brother, Paul “Jake” F. Gibson; nieces, Lynne Fleming (Dan), Cynthia Marie Pike, and Shaneen Gay Jahn (Stephan); nephews, Michael Allen Gibson (Carrie), and Keith Allen Lewis (Ellen); and many loving great nieces and nephews. Visitation will be held Sunday, March 6th, 2:00pm-6:00pm, at Owen Funeral Home, 5317 Dixie Highway Louisville KY, 40216. Service will be held, Monday March 7th, 11:00 am at the funeral home. Interment will be at Louisville Memorial Gardens West.

The family of William "Sonny" C. Gibson created this Life Tributes page to make it easy to share your memories.

Send flowers to the Gibson family.